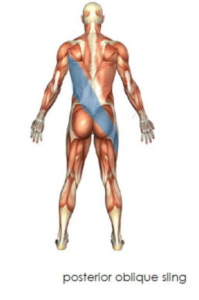 WALK, RUN, OR THROW: GAIT 101
When it comes to movement we’ve got three dimensions to move in; sagittal, coronal, and horizontal. Most exercise routines are done in the sagittal; front to back. When it comes to coronal (frontal) and horizontal (transverse) training, we rarely see or do it. And why don’t we? As bipeds we live in a three dimensional world, so doesn’t it make the most sense to train rotationally in the body? Walking, running, throwing, and any sport requires us to move within a spiral pattern. The fitness industry has sadly ignored these kinds of movements, leading to me today’s post about the sling system we have.

SPIRAL LINE: INTEGRATION AND FASCIAL BALANCING
We have several neural fabrics in our body. Nettings of fascia that encase nerves, arteries, muscles, and golgi tendon organs. These fascial continuums are layered in patterns that help support our skeletal structure and move us in a specific manner. Tom Myers of Anatomy Trains outlined these continuums with names. You have the superficial front line, the superficial back line, the deep front line, the functional line, the lateral line, but for today’s topic I want to emphasize the spiral line (seen above). You have a double helix of fascia that wraps around the axial and appendicular skeleton like a ribbon! Understanding this muscle subsystem is a necessity for doing movements done in the horizontal plane. Why will it benefit you to change up your training and incorporate horizontal plane exercises?

Simple answer- muscle balance and body integration. If you are only doing sagittal plane based exercises, you build up a muscle imbalance. For example; the skeletal muscle in your body that is involved in a squat, kettle bell swing, or pushup will start to undergo large hypertrophies that will only move the joint through a certain range of motion. The muscles creating these movements will get large, short, and have the potential to overwhlem and take the jobs of muscles that are involved in rotation, or lateral movement. So if you train primarily sagittally, when asked to perform a lateral jump or a rotational motion, your body won’t understand how to do it because the larger functioning muscles will attempt to do the desired movement and will fail horribly. Thats because a musclular imblance has been created and the muscles that move joints in other planes will be untrained in that spatial realm, under-fed, and deconditioned. There is no integration of the body across the diaphragm, there is no contralateral reciprocation, essentially ‘exercise’ can have zero correlation to human biomechanics. So the carry over from training to real life is slim-to-none without proper integration. 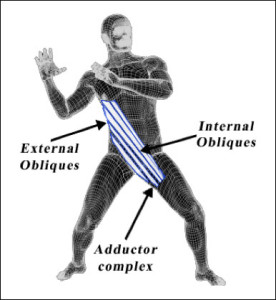 Training the natural rotational pattern in your body is necessary for sustained performance, regaining joint control, and progress in movement ability. Not only that, but it helps you move more like a human being (because again- walking, running, throwing, are all rotational based movements). I wanted to start with the simple explanation of your oblique sling. You have four of them, two in the front and two in the back. They connect your shoulder to the opposite hip, in the front and back, across your diaphragm.

A FEW THINGS ABOUT THE TRANSVERSE PLANE
It’s where your power lies, it’s where dynamic movement lives, so if you’re somebody plateauing in strength, energy, or power output it’s probably because you’re bleeding from your transverse plane, ie; it isn’t working. If you find yourself dehydrated often, experiencing muscle fatigue, or regular constipation, there could be a neural-block from to the lack of peristaltic movement in your fascial connections. Rotational movement helps to wring your belly and organs for improved circulation, hydration, and metabolic process. Lastly- it is crucial for anybody who has chronic joint inflammation, discomfort, or pain to train the sling system. You cannot keep doing the same thing over and over again expecting new reslts. Eventually the joints involved with your repetitive movements will become irritated and your brain’s only answer will to be to compensate somewhere else, thus manifesting pain and discomfort in the body. 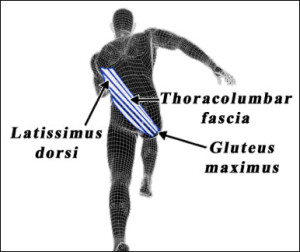 Starting a rotational routine isn’t easy, you’ve got to start by strengthening the mechanoreceptors to create the oblique sling connection. In the video below I’ve outlined one of the simplest ways to start doing this on your own. It isn’t necessarily a difficult exercise, but it’s all about feeling the precision behind the movement, to really feel your arm and opposite leg lift via the posterior oblique subsystem. Give it a try, and incorporate it into your warmups. It will only help strengthen your weak spots and give you a glimpse into horizontal plane training. Later on I’ll start to post some more involved and challenging oblique sling variations. Let me know how it goes! Remember to practice with attention and move with intention.